Since the arrival of the Morrowind Chapter to ESO, Magicka Templars have suffered a severe blow when it comes to end game DPS. Nevertheless, I still refuse to give up on bringing my main char to all kinds of trials. In this build, I want to show what I came up with in order to somehow keep up with my raid.

Dark Elf and High Elf should perform very similar. This build should not see any issues with Magicka, which is why Bretons will cause slightly less damage (~ 2%) 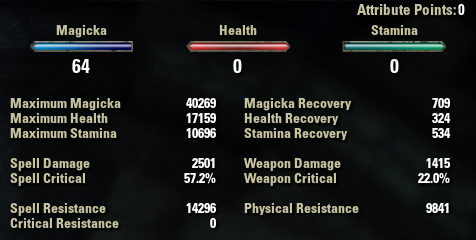 Since Harness Magicka is available, with proper awareness and experience it’s definitely possible to survive any encounter. However, if you feel you die too often by only a little too much damage, consider changing an armour enchant or two (Use tri-stat enchants if you are rich). 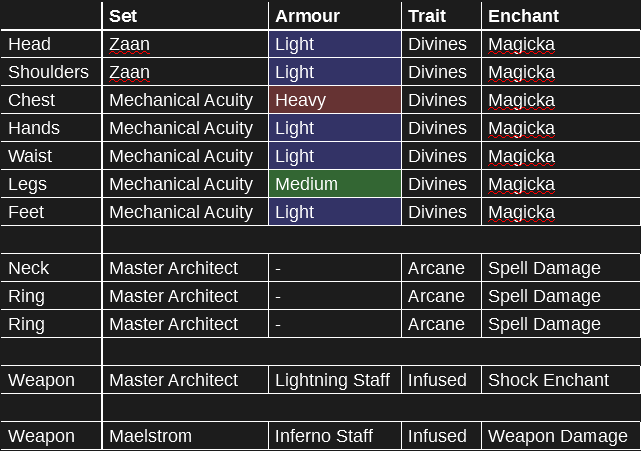 It’s best to go with 5/1/1 light/medium/heavy armour. Since Mechanical Acuity is a craft set you can use Zaan pieces of any armour type and adjust your other pieces accordingly.

While I think an infused Maelstrom Inferno staff is best if you have none available you can also use a Lightning Staff. The most important aspect is the increased damage of Light and Heavy attacks which gets more than doubled by the enchant.

If you don’t have a Maelstrom Staff available, you can use Mechanical Acuity Weapons and replace one of the armour pieces with Master Architect.

As an alternative to Zaan one can use Ilambris or Valkyn Skoria. In multi target fights its better to use Grothdarr or a 1/1 setup like Molag Kena / Slimecraw.

For well organised raids you might use a 5th piece of Master Architect with Empowering Sweeps instead of a Monster Set. While this might reduce your personal DPS if used in conjuntion with other effects, like Warhorn, it can provide some nice assistance for DPS Bursts.

Using the great tool from @Asayre (http://asayre.mygamesonline.org/HoTRoptimisation/CPOptimisation.html) shows that The Apprentice is best, with The Thief being very close. However, these calculations neglect that the damage from Monster Sets and the Purifying Light proc cannot crit, which reduces the effect of The Thief a little so it ends up at ~1% less. 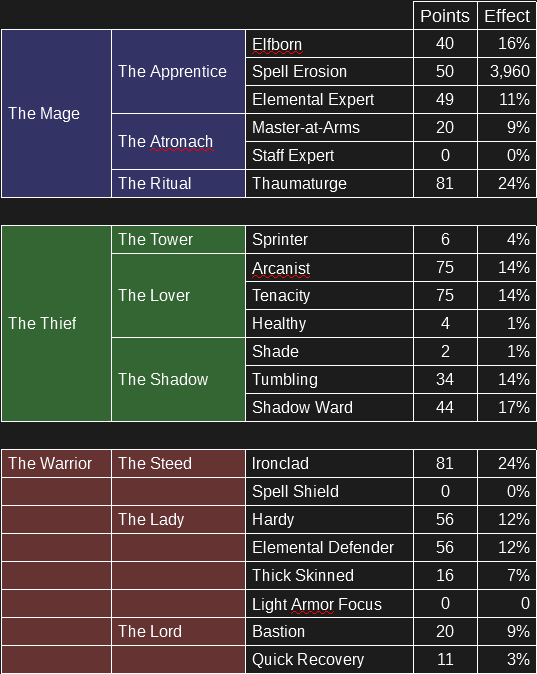 I haven’t checked this for trials yet, but in the end I will simply use Constellations (http://www.esoui.com/downloads/info1736-Constellations.html) to determine the optimal values.

I'm still putting 81 points into Thaumaturge to get the Exploiter passive. Using a CP set with the Exploiter passive only decreases the overall damage by less than 1%, before the passive applies. This can be checked by comparing the damage factor in Constellations or Asayres calculator in a free configuration and in one where the minimum in Thaumaturge is 75. Even at just 20% uptime of Off Balance, this is still a DPS increase (1-2%).

Shooting Star is usually the best Ulti unless targets are spread, where Elemental Rage is preferred.

Try to keep the Weapon Damage glyph up as much as possible, So take care that the light attack on the Inferno Staff is executed properly.

Starting the fight with Shooting Star or Heavy Attack on Inferno Staff and directly start the rotation without any additional light attack:

At 20% use the execute rotation:

I have made a few assumptions to determine the penetration I need to get out of the CP:

Note that the Destro Staff Passive (Penetrating Magic) also adds 949 Penetration but only affects 30% of the Damage. This however should be enough to actually make other CP options more useful.

Depending on the actual CP composition, putting 1 or 2 more into Spell Erosion might be a good idea, but I'll revisit this at a later point. Note that due to the fact that a fraction of the Damage gets some extra penetration, only 70% of the damage would benefit from more points into it. This will likely make other CP more atractive than Spell Erosion.