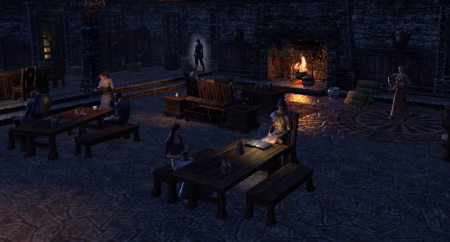 [The following is an in character interview for the release of the New Life Festival. I play the role of Gilfre Venegas, while Loremaster Lawrence Schick plays both Countess Aurorelle Edrald and Marwig Yeomcroft.]

Interviewer: Gilfre Venegas, a Breton writer who reads a ton and writes for one Wayrest's many publications: The Post and Courier. She is currently headed to The Cloudy Dregs Inn on assignment to interview an ambassador of the King and a Mages Guild scholar for a feature on the New Life Festival Special Edition.

Countess Aurorelle Edrald arrives at the inn in the polite, but rushed manner typical of the busy Wayrest court nobility. Her eyes darted around the room before landing on Gilfre, forming a friendly smile that betrayed only a bit of weariness; weariness undoubtedly from her role in the festival preparations, the young reporter assumed.

Gilfre: "I have heard that all three alliances have sent ambassadors to meet at Skywatch on Auridon during the New Life Festival. Why was this location chosen for the meeting and just what do the ambassadors hope to accomplish? How do you expect them to break the tension that is sure to emanate during this meeting?"

Countess Aurorelle Edrald smiled nodding, “New Life marks the solstice and the return of Magnus, and is celebrated by cultures across all of Tamriel. As such it is a perfect time to reflect on what unites us rather than what separates us, and to look ahead toward the possibilities of the new year. Even in a time of conflict opponents have common concerns that affect the welfare of their peoples, and although formal treaties may be out of reach at such a time, tacit agreement can still be established on matters of mutual best interest, such as piracy on the high seas or the spread of the perfidious practice of necromancy. It’s essential to keep diplomatic channels open, because negotiation is even more important between enemies than it is between allies. And I’m sure the world-famous Auridon wines will help keep the gathering amiable.”

Gilfre: "There has been a heap of murders recently in the Gold Coast region. Even the Primate of Akatosh was slain in the Kvatch chapel. With the New Year coming up what does the criminal culture look like during this time of year and what steps have been taken to protect our citizens?"

Countess Aurorelle Edrald paused pensively for a moment. “The erosion of civil society and the rule of law in the Gold Coast are just the latest examples of the ongoing collapse of the once-great culture of Cyrodiil, and cogent reminders of why the Daggerfall Covenant’s intervention in the heartland is so necessary. This is why King Emeric has pledged our blood and treasure to the succor of our co-religionists in Nibenay and Colovia, in a long-term bid to re-establish the Empire of Cyrodiil in emulation of the ideals of the exalted Reman the First. His Majesty is a student of Imperial history, and knows that crime is at its ebb when the institutions of a peaceful and strong civil society are at their height.”

Gilfre: "This year for the New Life Festival Alcaire will be holding a very lavish festival rumored to be paid for straight from the king's coffers. What kind of entertainment and refreshments will be served this year? Should residents of Wayrest worry about extra taxation next year to replenish gold back into the king's coffer?"

Countess Aurorelle Edrald gave Gilfre a slightly oblique expression before answering, “After the unfolding of the recent tragic events in the Duchy of Alcaire, nobility and common people both look forward to putting that tragedy behind them and looking forward to an end to suspicion and mystery. Therefore we think it right and appropriate that Alcaire should host a New Life Festival that will be remembered for a generation—and that is being partially funded, not-so-incidentally, by Duke Nathaniel’s brother-in-law King Fahara’jad. King Emeric urges all comers to celebrate New Life together in joy without anxiety or care about fiscal shortfall. All hail the return of Magnus!” 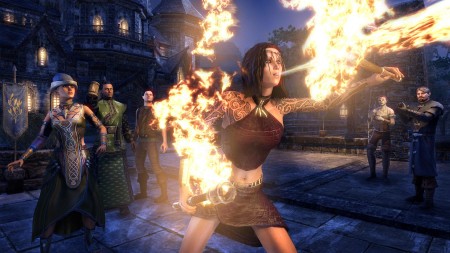 Gilfre arrives at her second meeting with a Mages Guild adept about to discuss the more arcane features of the New Life Festival. By mistake, she instead engages with an older, wrinkled gentleman wearing a grey cloak and an air of mystery, believing him to be her Mages Guild contact when he sits precisely where the adept was supposed to meet her.

Gilfre: "I have always been fascinated with goblins since reading a copy of a supposed goblin oral tale called “This many Goblins Left the Cave.” Do goblin tribes celebrate their own New Life Festival and is it uniform or does each tribe differ?"

Marwig Yeomcroft grinned impishly, “Was just talking about the local Goblin tribes with that young feller, Nellic Sterone. He says the Goblins have no word for ‘lamination’—can you imagine that? How can the ugly beggars talk to each other about affixing materials in multiple layers when they don’t even have a word for it? It makes you think, I tell you what. As to whether Golbins celebrate New Life, I have no idea—they sure as Shezarr don’t celebrate New Lamination, I’ll warrant you that! But any creature that appreciates the warmth of sunlight on their old bones is bound to appreciate the turning of the year and the return of Magnus, even if their celebration is just eating stewed skeever and donning new rat-skin hats.”

Gilfre: "Argonians in Shadowfen have a tradition called the “Fish Boon Feast” where those who are able fish do so for those who are not. Are there any other New Life Festivals that Argonians participate in in the other parts of Black Marsh? In particular I would love to know about the dynamic between Argonians and the Hist during this time of year and if it has anything to do with the king's jewel of Black Marsh I've heard rumors about, the so called Eye of Argonia."

Marwig Yeomcroft eyes flashed wickedly, and he shook his head slowly before responding: “You don’t fool me. I won’t say it, and you can’t trick me into saying it. I may be old, but I still have my wits about me, and I’ll wager I could still out-dance you in the Koeglin Hornpipe! Go try your monkey tricks on someone else. Anyway, I don’t know what they do in them marshes clear t’other side of Tamriel, but I’ve seen them lizard-folk when they’re celebrating whatever it is they celebrate, and they’re as quick to quaff a carafe of nut-brown ale as real people, and I’m even including Orcs in that. Meanwhile, have you ever thought about the fact that you can’t spell ‘Sithis’ without ‘Hist’? Or ‘this is,’ for that matter? It makes you think, I tell you what.”

Gilfre: "My final question is in regards to the Dwemer. I have read an old tale referring to “The Scarab that transforms into the new man” in regards to an old Dwemer puzzle. This brought to mind the New Life Festival and how the Dwemer must have had some tradition dealing with this time of year. What can you tell us about the Dwemer’s traditions and celebrations?"

Marwig Yeomcroft inclined his head, donning a broad, wolfish smile: “What can I tell you about the Dwemer? Why, just everything, that’s all! I’ll tell you something, youngster, if you promise not to tell nobody else. How old do you think I am? Never mind, don’t bother answering, because you wouldn’t answer right and there’s no way you could. I am older than you can possibly imagine. I have abided for eons and seen wonders untold because I am … the Last Living Dwarf. Yes! Oh, I see you doubt me. I see you don’t believe it. But I’m working on a device that will prove it to everyone—I just need a few more parts, a soul gem or two, maybe a tonal inverter, and then it will be finished: my Scaraliminofexamidium! Then I’ll show you a Dwarven celebration or two—then I’ll show you a ‘new man,’ you jumped-up nixad! Ha ha! I’ll make you think, I tell you what.”