the magicka Nightblade is the gem of all classes in ESO, even if it is definitively not the strongest.

It has this fascinating roguish, bloodmagical character, which I really like.

It is obvious, that I am not the best Nightblade out there, but I hope you enjoy this guide.

The main goal is to introduce new players to this awesome class, and to be thought-provoking for experienced players.

This guide is written based on my experience, trial and error and occasionally some calculations.

Nevertheless the main resource is knowledge and experience from other players.

Also many thanks to Sufferas and Mr_Bombastic, the NBs of eXceed.

Special thanks to @Priox, some random Templar living under a bridge in Riften,

and tyrant84 the first magicka NB I met, and who changed Sanyarin'Donnerblatt from stamina to magicka. 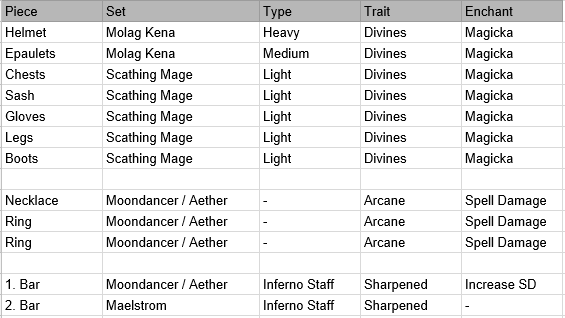 If you have the same Maelstrom luck, you should consider Choice 2. 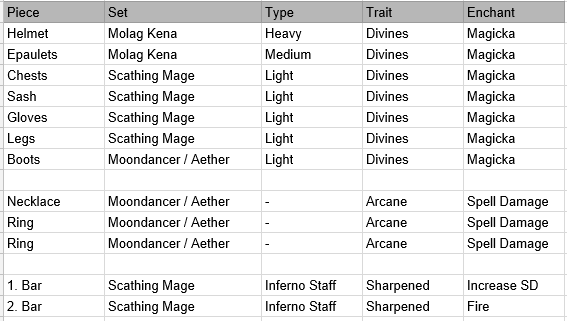 And since I already wasted too much time and gold to get these Staffs, I play 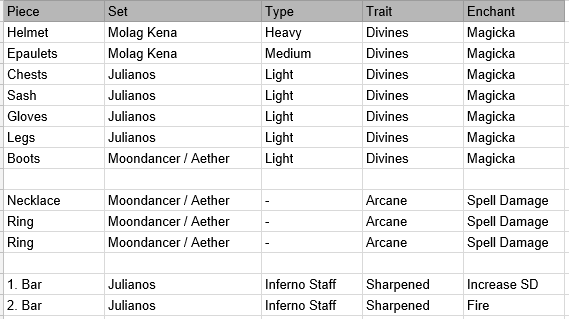 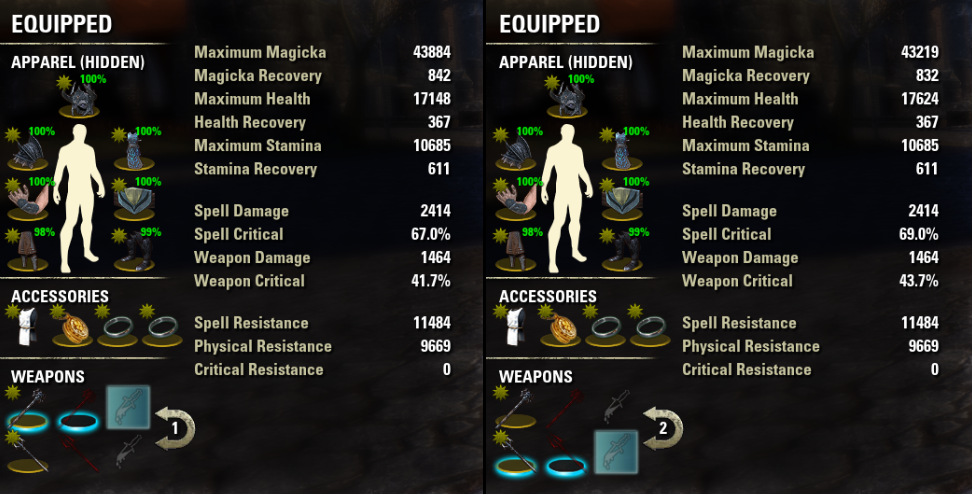 ¹ Lorkhan's Tears, Lady's Smock, Cornflower, Water Hyacinth. The crit buff does not stack with Inner Light. But the finally fixed this  bug. So you can equip inner light on one bar, and use potions to get the spellcrit on the other bar.

The full list of all skills and passives can be found on Skillfactory .

On that page you also get a description of each skill.

The choice of skill placement¹ is based on three basic rules.

¹ The placement of Bar 1 and Bar2 holds true with the ideal gear equipped, i.e. Maelstrom Staff on Bar 2.

² In singletarget I roughly deal 45% damage from single target abilitys, 35% from AoE and 15% from Light Attacks and 5% from other sources. Since the main goal is to kill the boss fast, while adds should die from ground DoTs, I chose Inferno Staffs over Lightning Staffs. (But I have to do more tests with Lightning Staffs.)

The numbers in []-brackets are the rules stated above. On each bar, one of has to be set.

If you read guides, you will often find instructions like [skill1]-LA-[skill2]-LA-... - start again.

I don't have such a guideline for my rotation, not because it is better, but because I am lazy :D

There are some basic rules.

Then we do what "above 25%" tells us: While Lightattack-Weaving: Shooting Star - WoE -  Crippling Grasp - Twisting Path. (If Scathing Mage, then Twisting Path first.)

I have been on a break for 3 month, and the following screenshots are made in the first tries of my first raid after the break. I hope to capture better results for the 2nd and 3rd boss, soon.

Numbers in [] are the percentage of boss damage (i.e. singletarget).

Update: Added a second hoster for the screenshots ...

If you are able to speak German, and want to learn the basic mechanics of each boss, then I encourage you to watch Zapzaraps videos: 1, 2, 3

(Keep in mind that these are pretty old and taken from early tries. But he explains the basic mechanics very well.)

This section will grow, with more questions asked.

Check out our Performance  here.

Also I am one of the leaders of a not-so-progress-but-cool-people (German) raid group, called "Die Werner".

While eXceed is working on vMoL hardmode, we are currently working on continuity with the 2nd boss and Rakkhat (non hm).