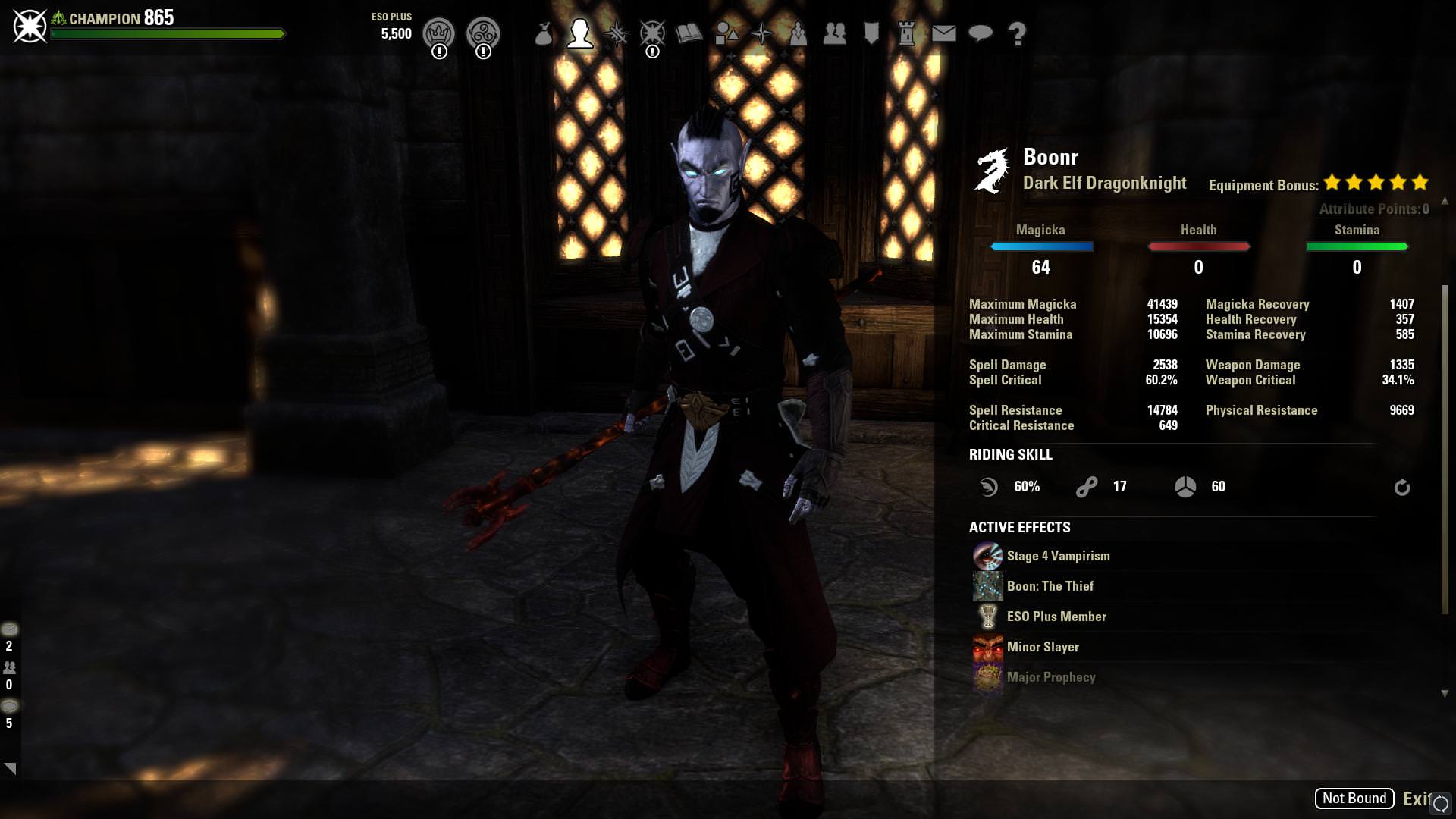 Hey everyone Boone here. Summerset is finally here and MagDK is a very strong contender for the best damage dealer. That's the catch, we don't really bring anything buff-wise to the group, but we have top tier damage now so we are a perfect "leech" class. Lets get started.

Right. There are two main setups and they both deal pretty much identical damage but thankfully whip is slightly better in terms of effectiveness in-raid. Asylum is still similar damage but requires a clean rotation for the whole fight, which is definitely doable on most fights but everyone has had to adapt in certain situations. One thing that needs to be factored in is the amount of minor vulnerability providers are in your raid, if it's low asylum will be the best option to use.

We still keep this controversial skill but in my opinion is completely viable if you know your trial mechanics. It's learn to play entirely. The skill is Balance (equilibrium). A mages guild skill. The combustion sustain change just isn't enough to make up for our expensive rotation. We have changed to Clockwork Citrus Filet so we won't need to spam this but we will keep it slotted as a precaution as it still gives us 2% more max magicka, and now it will empower our next light attack by 40% so it's definitely worth keeping. 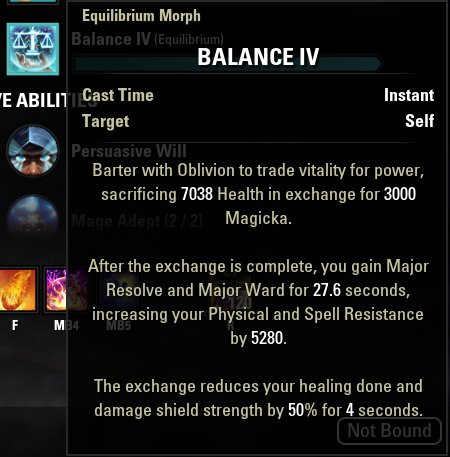 Yes you lose health when cast but you should be instantly healed anyways in most groups and if not, to be extra safe I usually only use it right before burning embers, which heals us to full no matter what. Just don't cast this if a oneshot mechanic is coming up. This build requires knowledge of how fights develop in raids. The actual health lost is more around the region of 5K damage, the tool-tip doesn't account for passives here.

Note: We use the Thief Mundus here!

For the gear we are using 5x Perfected Siroria on the body. Even disregarding the stacking spell damage, the set is just extremely strong and you can regard any of those stacks you get as a bonus, obviously you want to get the max stacks possible but realistically it will reset a few times on most fights. Point being, it's the best set to use on body. Burning spellweave is used on our front bar only now that staves count as 2 pieces, it's a proc so we can achieve similar uptimes as to having it on body, they are less but siroria on body is just worth it.

For our monster helm we use Zaan. Zaan can be 3k single target in raid so it's well worth using on boss fights. Just make sure you don't break Zaan's 10 metre range and you'll have great DPS.

In most fights we will use a flame glyph. However on some special bosses such as Rakkhat, first two bosses on vAA and Ra Kotu we can use a prismatic enchant! Massive deeps. 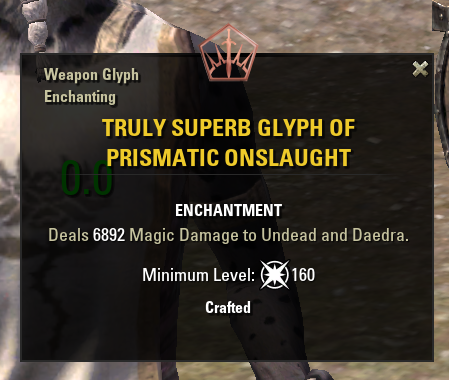 Regarding the switch to the thief mundus. With this much spell damage, the Apprentice is just not as big of an increase to our base stats. Think of it as our Crit is bottlenecking the spell damage from being used if we went with the apprentice. The apprentice is still good don't get me wrong, but the thief just wins out. Especially these days where major force usually has higher uptime with jorvulds guidance being used by most groups on 2 or 3 of the supports. If anyone has seen the recent hysteria about mother's sorrow, it's the same reason but the thief is just more optimal for us. Even in our asylum setup, the thief is also a good mundus to use because of these major force uptimes, but without BSW there the apprentice is just nice to have for more consistency in spell damage!

Regarding the bloodthirsty trait. MagDK doesn't have any execute damage which means we wouldn't be getting as much use out of the ring trait as the magblades/sorcerers or any stam in our group. This means that the effectiveness of bloodthirsty for us is really diminished compared to a dummy, the DPS in execute phase really favours nightblades. The exception to this is of course when we drop standard of might, at that point we will hold our own with that trait of course, but it's just a matter of knowing will you have a standard ready for execute phase. In the end it depends on each fight.

Note: We use the Apprentice Mundus here!

Skill 3: Engulfing Flames. An AOE DoT that increases everyone in your raids flame damage by 10%.

Skill 4:  Balance. Our means of sustaining in a longer fight. Also provides nice tanky Major ward and resolve resistances. if you cast this ability correctly you will actually find yourself surviving more in raids rather than what you think it will do - kill you. Use it in place of your 5th or 7th whip in the upcoming rotation when required (we only use it if we feel like it's needed). The reason for that is it is right before the burning embers heal and also it's when your berserker enchant has downtime. Rotation explanation is below this.

Ult: Elemental Rage (Destro ult). Nice for trash fights and it provides you with the much needed ancient knowledge destruction staff passive.

Skill 1: Eruption. An 18 seconds AOE Ground based DoT. Provides the group with minor brutality if you don't have any DK tanks in the group. The damage isn't brilliant but if a boss is guaranteed to stay in the AOE for the full duration it's worth placing.

Skill 2: Rearming trap. A skill that gives us minor force, 10% more crit damage done. Very Good. Explanation on Channeled Acceleration (Psijic skill) will be below this.

Skill 3: Flames of Oblivion. An amazing skill. DoT that does single target damage.

Skill 5: Harness Magicka  (or Mages Light for fights that aren't too damage heavy). With good healers it's okay to not bring a shield to certain fights, however don't be an idiot, bring one in a fight that isn't easily healed. Do you trust your healers on easier fights? Then bring magelight. If you decide to not bring one and end up dying, it's your fault, don't blame them.

Ult: Standard of Might. In our rotation this ult buffs our damage done by a crazy amount. You can expect to see a huge surge of your DPS after casting this.

The rotation for MagDK is a longer rotation. It can be hard to learn mobile fights but once you do there should be no problems dealing some nice DPS.

Here is an example video of me doing a 6M dummy with ele drain and orbs support. Your sustain should be even better in trial.

For red CPs, change based on your trial. 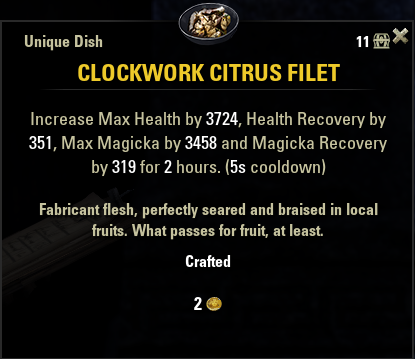 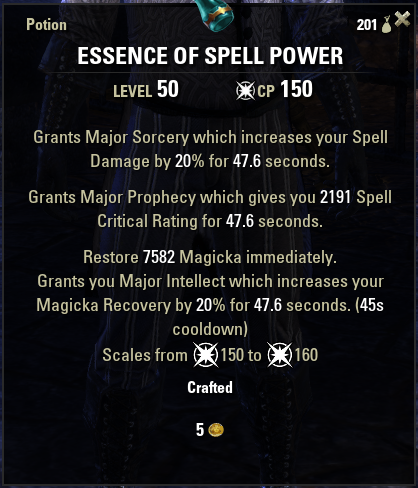 note: with the spell power potions you can make 2 trait pots with just major sorcery and restore magicka to save a little bit of money as our skills on both bars already provide the crit bonus.

You should be a vampire. Stage 2 for any fights with high fire damage.

If you have any questions and are on the PC-EU server, message me in-game: @HamburglarJones. I'm also available on discord at: Boone#2391

Special thanks to @curry-noodle for his help! I wouldn't have been able to determine what was BiS without him.