Hello everyone and welcome to my Eruption Stamina DK guide! 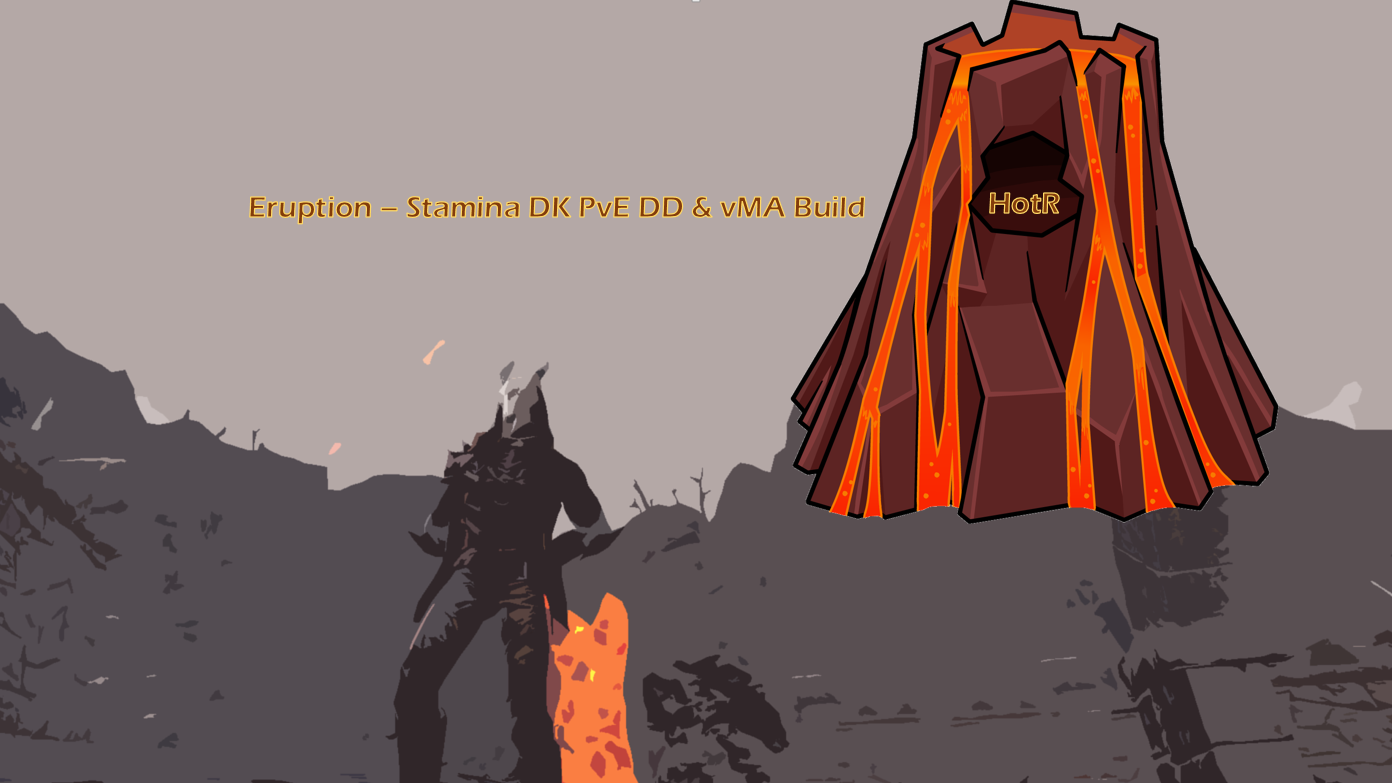 Stamina DKs are at the peak of their glory in PvE currently, as they put out the highest single target damage while retaining a very easy rotation comepared to stamina nightblades. This Build is off the usual meta builds as it uses the red mountain set, a very very powerful proc set in solo and raid environments. It also looks awesome seeing volcanoes popping up every 3-4 seconds everywhere (even more as soon as there are adds to bosses).

Redguard is best, but my Stam DK is my Tank (I offtank vAA HM and vHRC HM with him sometimes and go DD prior to that), so he is Imperial. With the cow hat it does't make a difference anyway, everything looks exactly the same, ugly as hell. Woodelf, Orc, Khajiit, all is fine and works, as sustain is very good due to the heavy attacks. 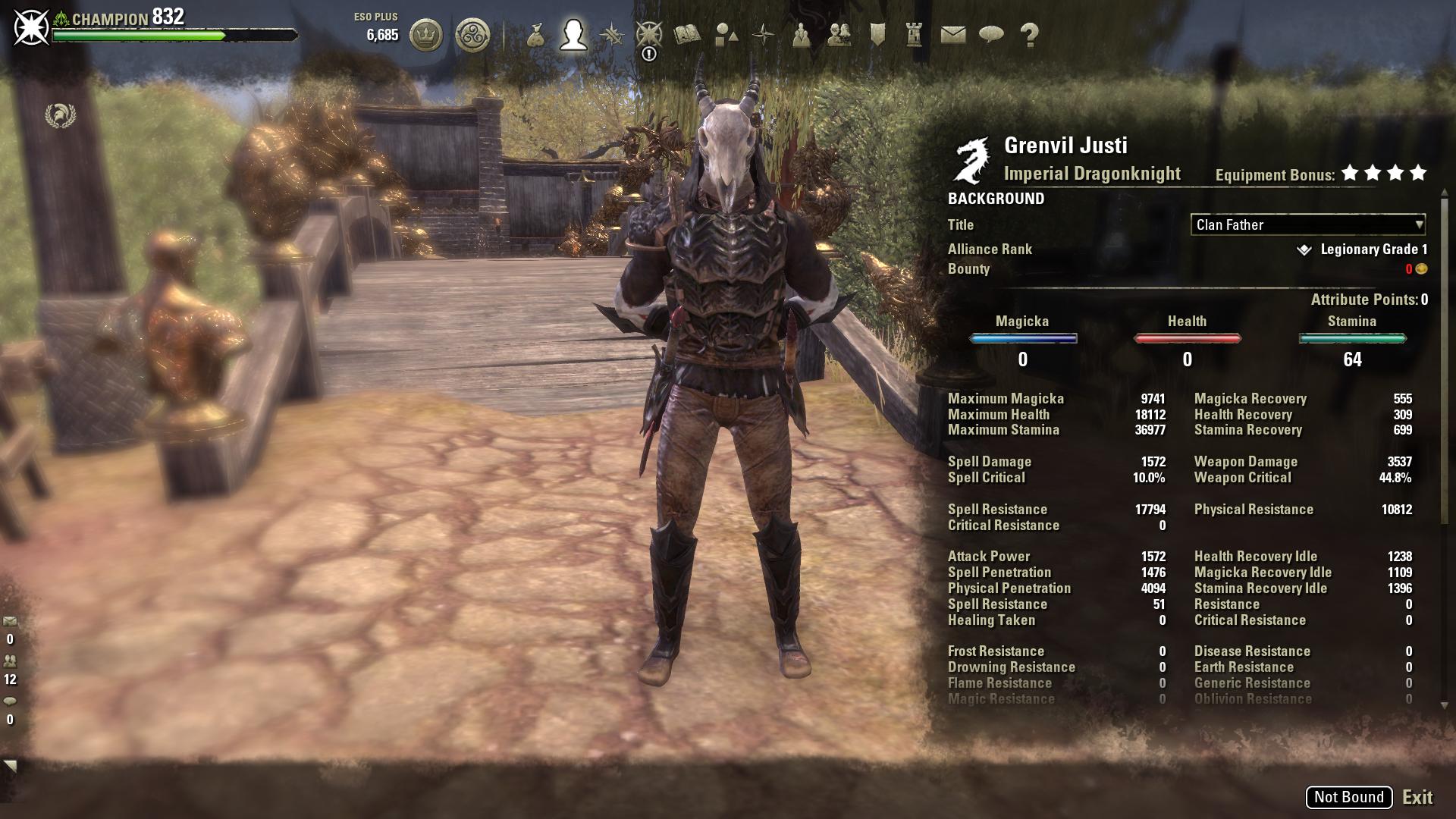 Vicious ophidian is essential. The Stamina Return is absolutely needed, so farm any 5 pieces of it, even if it is blue, doesnt matter.

On stages 5 and 7 ion vMA i use reflective scales instead of noxious, they're plain awesome to kill ranged mobs such as the ice casters and archers. You can also run that the entire time, as there is stuff to reflect on all stages.

Red mountain is such a cool set with the new volcano visual and does about 5% of your damage from the front bar only. It procs off half of our abilities, such as endless hail, injection, rending slashes and blade claok. On top, it also procs off our heavy attacks. on the front bar. It does exceptionally good DPS from the front bar only and procs off cooldown in aoe scenarios if you put down endless hail and have blade claok active. Keep in mind that this set scales off SPELL penetration, which is also the reason for the sharpened off hand. I have 1.4k spell penetration in the above parse, so with raidbuffs on it will become a lot more damage from the proc itself, up to 9k per hit with the right amount of debuffs on the target. If i had an infused sudnerflame dagger (transmutation, whoop), i'd use RM on both bars to get even more out of it.

Why Flames of oblivion and not noxious? Why not both?

FoO uses magicka and does more damage than noxious. So we save stamina and hit harder in cases where fracture is already on the target. In case you need to apply fracture, use noxious, done. Using both complicates our rotation without necessarily improving it and having vigor on the back bar helps a lot in many situations.

Rotate counterclockwise through your abilities, start with molten, FoO, Trap, Potion, Bar swap before the fight. Then light attack weave Hail, Caltrops, Injection, Bar swap. Heavy atatck weave every skill on front bar from right to left. Restart at Hail and then recast molten everytime when necessary (every third rotation).

I tried to show it visually, hope it's understandable. 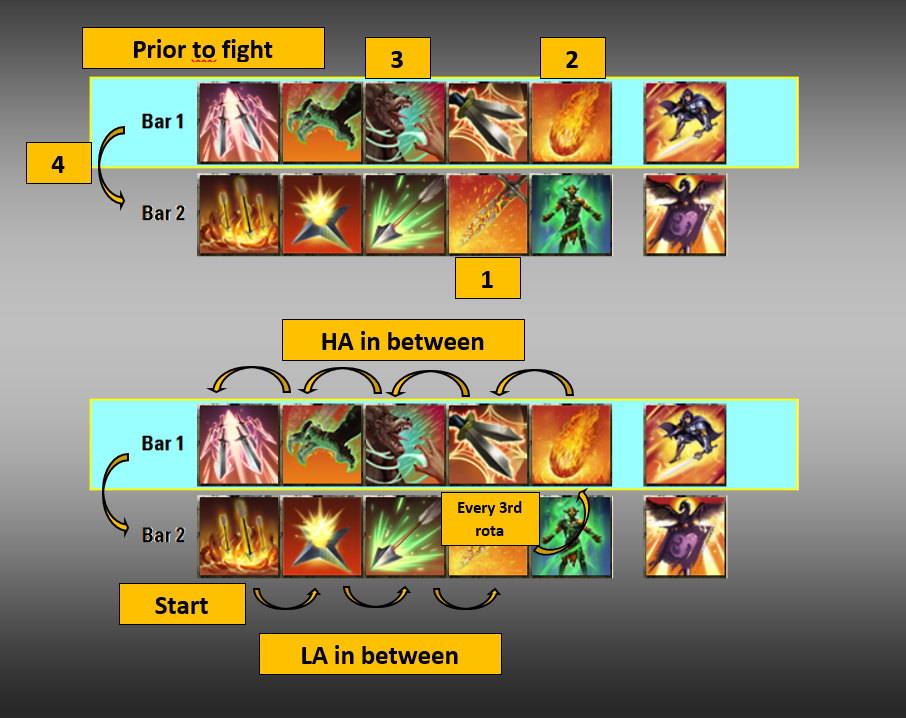 6m Solo parse with noxious breath (only 80% fracture from noxious): 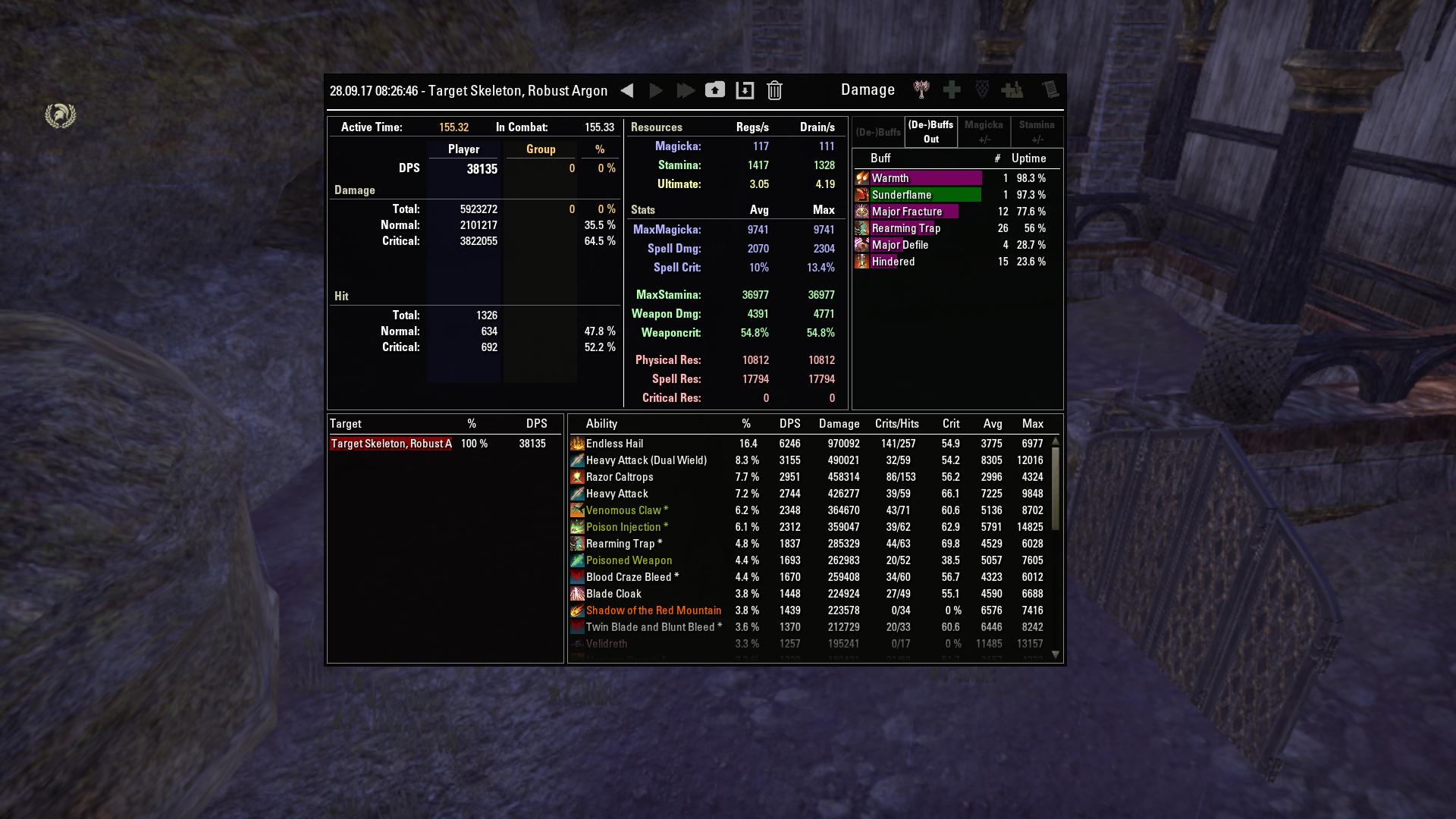 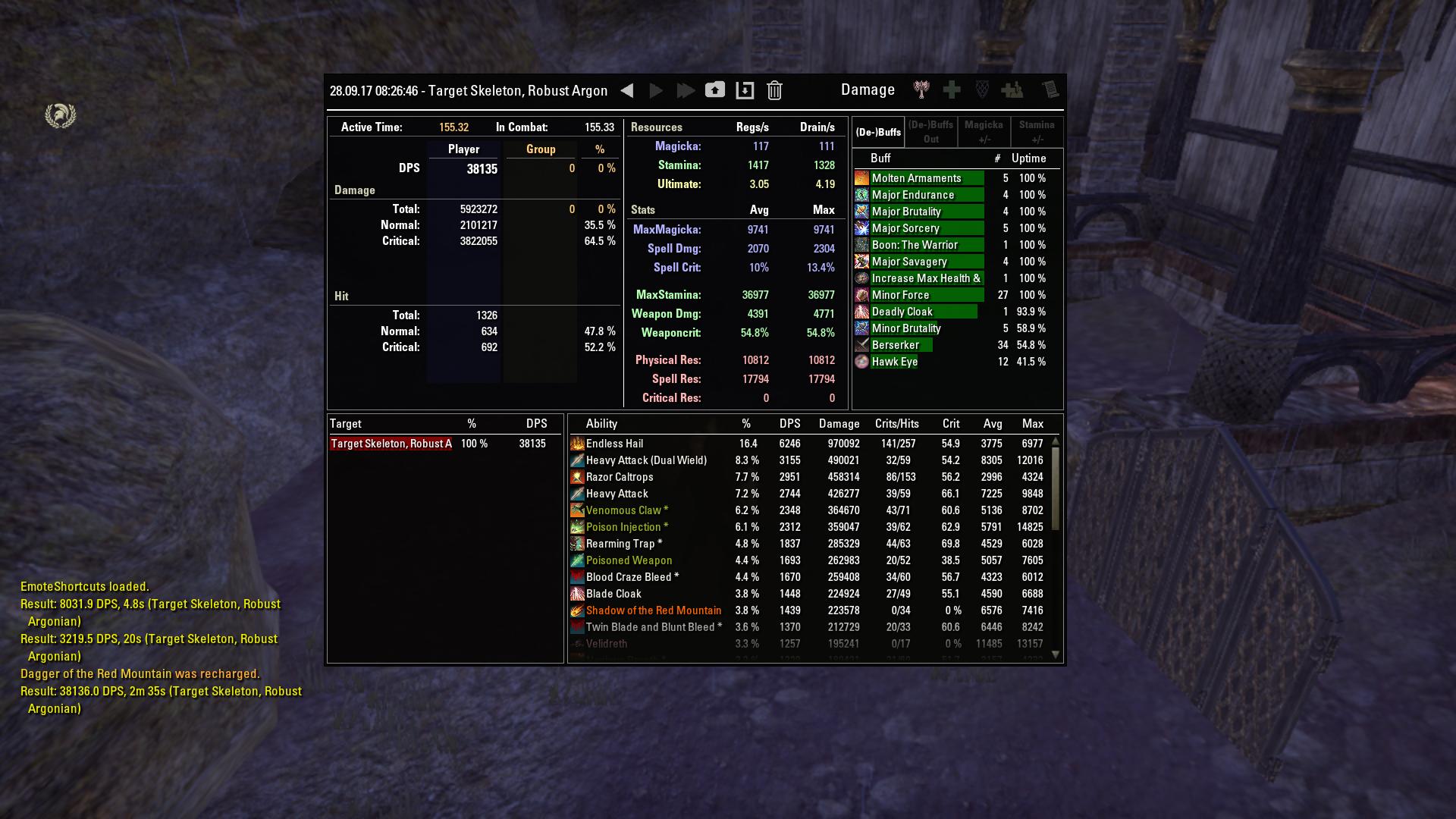 6m Parse with tank putting on fracture and breach (no crusher) and me using flames of oblivion: 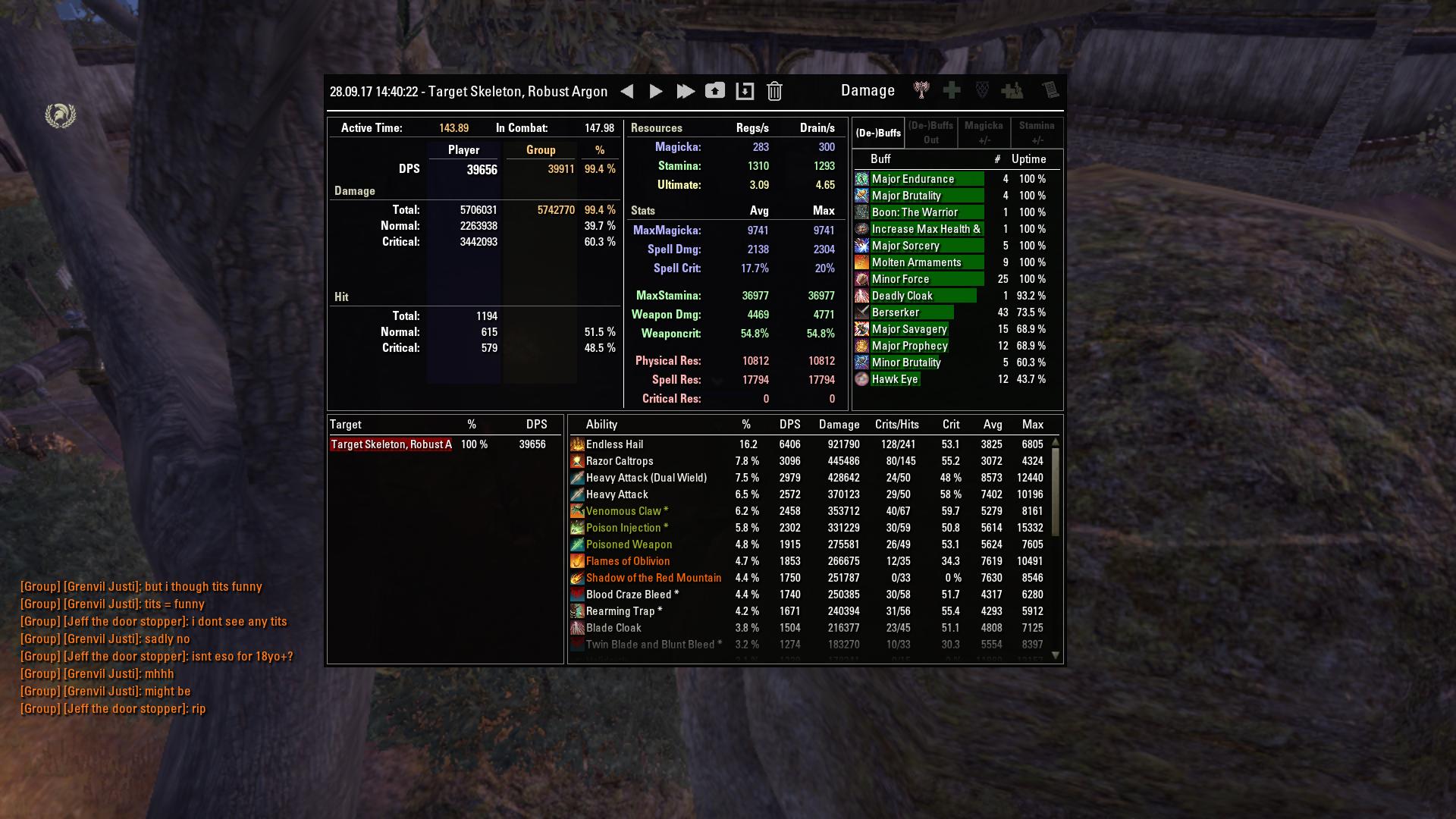 If you have questions, go ahead! Hope you like the build.